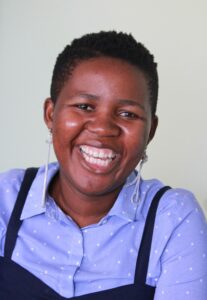 Balisa reflects on her earliest exposure to GBV

With the recent commencement of 16 Days of Activism for No Violence against Women and Children, last week, our team member, Balisa reflects on her earliest exposure to Gender Based Violence (GBV) and calls upon everyone to speak out against GBV.

Growing up in Marewini Location, a village nicely tucked under a stone quarry in Libode in the Eastern Cape, life was interesting! If it was a person, one would swear Marewini had multiple personalities. Marewini Location is a microcosm of the larger society, where GBV victims are still buried in silence.

The village was particularly eventful by day. We’d be happily playing hopscotch. The next day, in groups of children, older men and women, under black skies each homestead in the community would be hitting pots and gongs and imploring the weather gods to have mercy on us and cease the looming rains. Embo Myalwane! Dlulela ngaphambili!

Another day we’d be merrily making our way to mass as a group of believers, following our neighbour, who recently converted to Christianity and let go of all worldly things! Bargaining with the Lord, that if we submit to Him, could He, in turn, give us nicer food like those children who travelled to school from Mthatha. They always had the best lunch boxes!

It was in the nighttime that things took a different turn. The mood would suddenly, stop being jovial. I know this because, somehow, it always coincided with my father’s return from the local isirhoxo (illicit pub).

As tata’s incoherent footsteps became more vivid, mama would command all of us to get into bed and cover our faces. Of course, it never occurred to us why this was, we simply complied. As an adult and a mom today, I am certain this was mama’s attempt at shielding us from the abuse that would come with our father’s arrival.

Outside, in neighbouring homesteads, it was not any better. Swears, screams and cries were clear as day. Did all fathers arrive at the same time and wreak havoc?

Sadly, when morning came, no one dared talk about what had happened in their homes to their mothers or to them as children, the previous night.

More than 20 years ago, this was my first introduction to GBV and, 20 years on, I still know many women and families with similar realities. Speak out against GBV now and turn 16 days of activism into everyday!

If you are our tenant and need to talk to someone, contact our call centre on 0800 266 737 to book an appointment with our qualified social workers from Vulamathuba, our social development arm.

You can also reach out to other organisations like the following and many more: